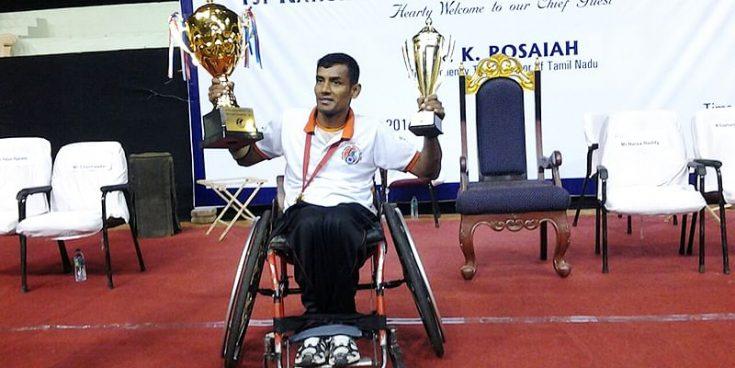 At 28, Naik Suresh Kumar Karki suffered an injury to his spinal cord that would change his life forever. From safeguarding his country’s pride in warfare, he turned to defending national honour in sport. All because of a freak accident—he did not take the bullet for his team in the literal sense of battle, but was in a car crash while trying to save a wounded friend after an insurgency attack.

Years later and now a paraplegic, his optimism is infectious. He never once speaks of his disability except to tell me of everything he has done since his injury. “There are many heroes at our rehabilitation centre,” he emphasises. One does not doubt that Suresh is one of them.

One long road In July 2004, Suresh was serving in the 2/9 Gorkha Rifles which was then posted in Assam. A soldier was wounded by a bullet during an insurgency, and Suresh was taking his friend to Guwahati Army Hospital in an army ambulance. The ambulance met with an accident with a civilian passenger bus an hour away from the hospital.

The driver and nurse died on the spot. Suresh fell off the vehicle on to the street. “I don’t remember why and how I fell off. Perhaps I jumped off. I have no memory. But I survived,” recalls the 43-year-old. Colleagues travelling in the accompanying pilot car took Suresh and the patient, who, miraculously, was unharmed by the accident, to a nearby civilian hospital and then, to Army Hospital.

From Guwahati, Suresh was taken to Command Hospital, Kolkata. Nothing could be done for the damaged nerves, but he underwent surgery due to dislocated ribs. They put grafting rods in my body. I still have rods in me.

After that, he was shifted to Command Hospital, Lucknow, and then, to Military Hospital, Pune. In Pune, Suresh received further treatment and, while with the hospital, completed a course in industrial services from Pune University. He often lost hope, he says, as he was confined to the bed and to medical care for months on end. “I couldn’t move. I had to be turned on my side every now and then to pre-empt any skin sores.” Pune, however, brought a turn in his life. He worked at Military Hospital and, on retirement, relocated to Paraplegic Rehabilitation Centre, Kirkee in 2011.

It is here that Suresh now lives with his wife and their sons. He speaks cheerily of Rohan, who scored 76 percent in his Class 12 board examinations this year, and Samir, who is an eighth-grader at Army School. “Samir is like me,” he laughs. “He plays too much.”

At the rehabilitation centre, Suresh plays lawn tennis, badminton, and table tennis. He participates in swimming and marathons. He plays basketball at national and international levels. Recently, in April 2017, he won the silver medal at the Uganda Para-Badminton International Tournament. He played at the Thailand Para-Badminton Tournament in May 2017, and then in Bangkok in June. Till date, he has participated in 16 singles and 21 doubles, and has 18 national and four international medals under his belt.

Despite being bound to a wheelchair since 2004, Karki is one of the most successful para-athletes of the country. In 2015, Karki won a silver medal in the 2nd para-badminton international tournament and had won the national wheelchair basketball championship in 2014. Karki had covered a 10km run within 29mins at the Hyderabad marathon.

Karki attributed his success to the Indian Army. Karki said, “Army teaches you discipline and that has helped me achieve many things in life. I have always believed in working hard and with discipline and hard work, no such disability can deter you from winning.”

The former soldier shared his future plans. “I want to achieve top world rankings since not many know about para-athletes and this sport. Many disabled persons have thanked my team at PRC for inspiring them. We would like to inspire many more para-athletes in the future.

Youthmotivation
मोटिवेशनल वीडियो
IPS Officer Krishna Prakash is talking regarding his Motivational story of becoming an Ironman from India. He is an IPS officer from the...

Youthmotivation
मोटिवेशनल वीडियो
Sundar Pichai is a computer engineer and the current CEO of Google Inc. The technology giant Google, which specializes in Internet-related services and products,...