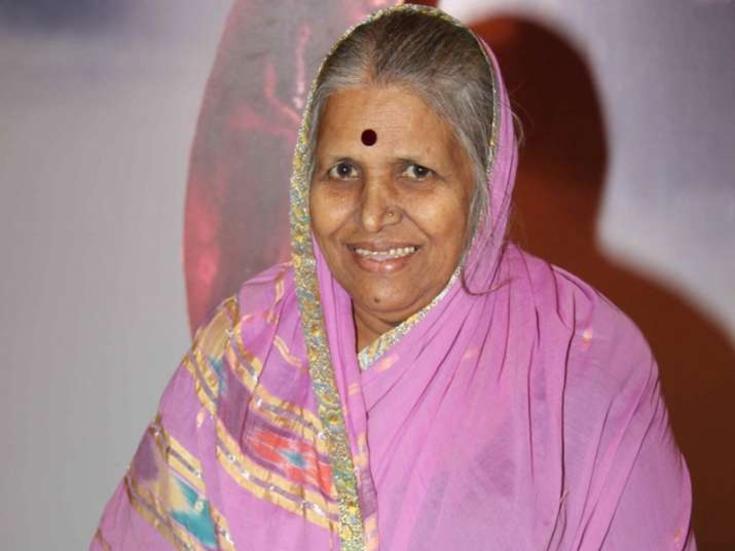 Sindhutai Sapkal deserves a grand salute for her perseverance and dedication to serve the humanity!

She was born on 14 November 1948 at Pimpri Meghe village in Wardha district Maharashtra to Abhimanji Sathe, a cowherd by profession. Being an unwanted child, she was nicknamed ‘Chindhi’ (torn piece of cloth). Her father was keen on educating Sindhutai, much against the wishes of her mother. Abhimanji used to send her to school under the pretext of cattle grazing, where she would use ‘leaves of Bharadi Tree’ as a slate as she could not afford a real slate because of financial reasons. Abject poverty, responsibilities & an early marriage forced her to quit formal education after she passed 4th grade.
At the tender age of 12, she got married to Shrihari Sapkal alias Harbaji, whose age more than double a cowherd from Navargaon village in Wardha District.

She put up a successful agitation against she fought for her self on collection of dried cow dung used as fuel in India and selling it in collusion with forest department, without paying anything to the villagers. Her agitation brought the district collector to her village and on realizing she was right, he passed an order which the strongman did not like. Stung by the insult at the hands of a poor woman, he managed to convince her husband to abandon her when she was beyond 9 months of her pregnancy. Her husband thrashed her and kicked her on her full term belly and threw her in a cowshed. Tormented and tortured, Sindhutai with her world falling apart, and in great pain, gave birth to a baby girl. Sindhutai cut her umbilical cord with the stone which was lying there and then she passed out. Her husband and other family left her to her destiny. After she came back to her senses she went to her maternal village but everyone shunned her and rejected her. Even her mother closed the doors to her.

Sindhutai was alone in the world with her little daughter to look after. She was hungry and the baby was hungry two. Pangs of hunger were intolerable. She wanted to save herself from the pangs of hunger and wicked ways of people. She took shelter in a crematory. She saw a dead body was burning. The last rites were ove and the relatives of the departed had left. They had left some flour as a part of the last rituals for the departed soul. Sindhutai took that flour, kneaded it and prepared a bhakari (roti) and baked it on the fire which was still consuming the dead body.

Sindhutai is blessed with natural flare for singing. She used to sing and beg and feed herself and her baby. She would visit temples, traveling by train, begging and singing. She was often joining by other beggars and she would feed these beggars too. She wondered from one place to another begging and singing. Months and years passed. Life went on. All alone in the world with a baby to look after, she would sing heart rending songs that would fetch money for her. She had no one to look up to and she belonged to none. She entrusted her little daughter whom she had named Mamata to Shrimant Dagaduseth Halwai Trust, So that she could be looked after properly. Sindhutai singing and begging continued.

Sindhutai would work wholeheartedly for orphans and destitute and other less fortunate. She poured out her motherly love and affection on orphans. She took them under her wings. She gave them food and shelter in whatever way she could. Lovingly they call her Aai. Her orphanage is an orphanage with difference. Generally orphanages just keep their wards up to the age of 18. Sindhutai keeps her wards till they get their jobs, get married and settle in life. Age of inmates varied from 8 day old baby to a person who is in his eighties. Sidhutai’s work is totally backed and funded by private donations and other help from various walks of life. She never let the travails of her own life let her spirit down. They made her strong. Her heart rending speeches, her oratory, her recitals of poems, and gazals are so appealing. After the struggle of years, Sindhutai is assisted by her daughter Mamata and son Deepak and her other grown up sons. She has been a “MOTHER” to many.

She has devoted her entire life for orphans. As a result she is fondly called ‘Mai’ (mother). She has nurtured over 1050 orphaned children. As of today, she has a grand family of 207 son-in-laws, 36 daughter-in-laws.
She still continues to fight for the next meal for her children. Many of the children whom she adopted are well-educated lawyers, lecturer and some including her biological daughter, are running their own independent orphanages. One of her children is doing a Ph. D. on her life. She has been honored with more than 750 awards for her dedication and work. She used the award money to buy land to make a home for her orphan children. Because of her dedication and sacrifices, today the children have their own building at Manjari, Dist. Pune with all facilities i.e. Computer room, Big hall for cultural activities, Solar System, Water filter, Library, Study room, and all required facilities. Mai is always trying to give a good standard of living to her children along with food, clothing, shelter, education and rehabilitation
In person, she comes across as a bottomless source of energy and inspiration, with absolutely no negative emotions or ill will for anybody.

The unusual life of Sindhu tai is an inspiration for all of us. Even after facing so many hardships, she stood tall and made her way into everyone’s heart. She proved that if you are dedicated, nothing can stop you from changing the lives of thousands of people around you. We salute this brave lady and hope that the country gives birth to many such strong daughters and mothers.

I am a Woman Not a PRODUCT

The Mountain Man who worked for 22 years and carved a path through a...